Memorials are After all Only Symbolic Works of Art 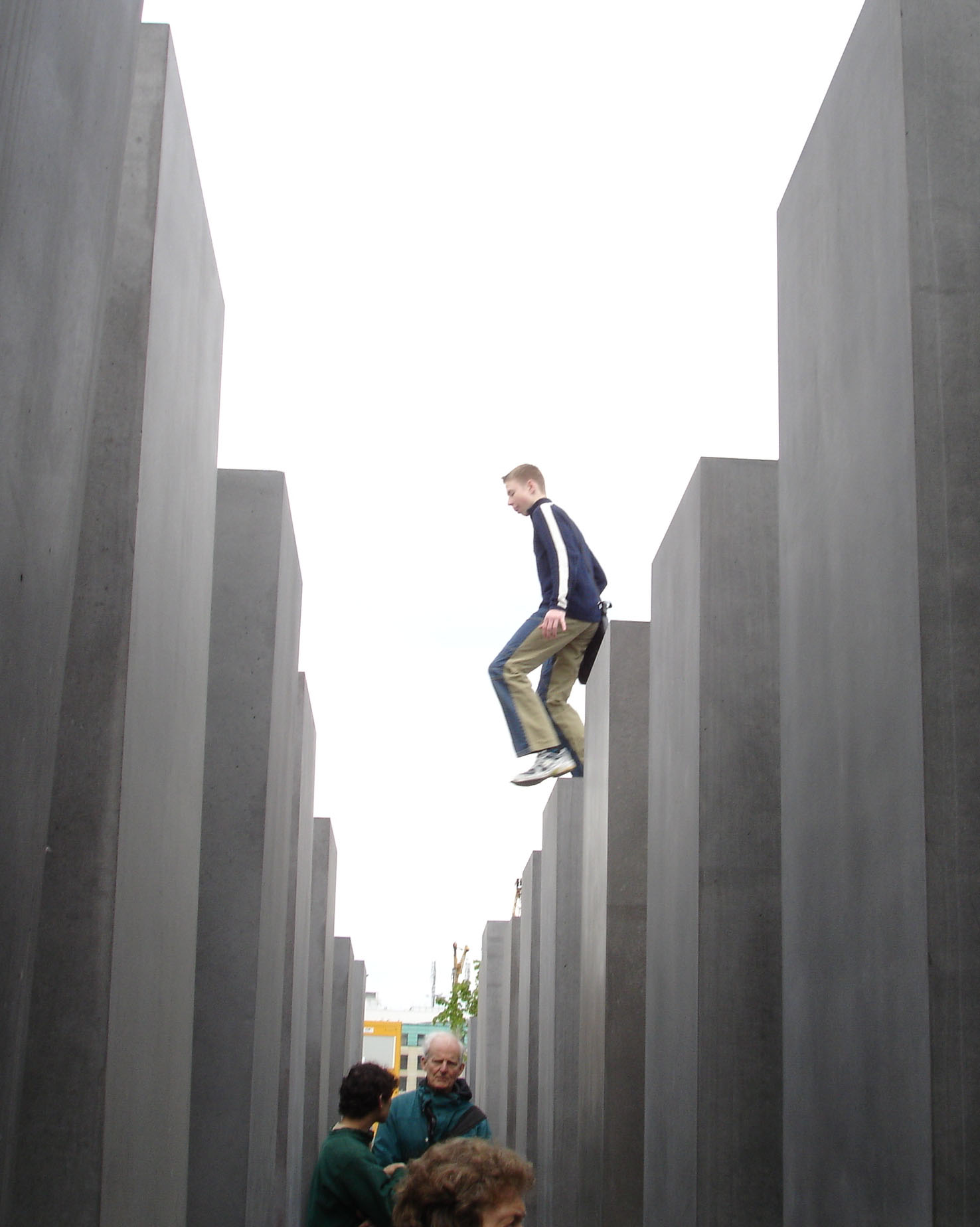 Controversies that appear in connection with the creation process of war memorials are perhaps necessary ingredients in the healing process that follows a severely traumatising war. This process enables discussions regarding the roles of victims and perpetrators, governments and ideologies. You could even argue that it is possible to determine how well a state manages to handle the aftermath of a conflict by analysing the public's reactions to a memorial.

This seems to be the case when it comes to the complex situation that the German state and people face in dealing with the atrocities of World War II and how it should be remembered. When you sum up the last weeks events in the German capital of Berlin, which celebrated 60 th anniversary of the end of World War II on the 8th of May, it is the opening of the new Memorial to the Murdered Jews of Europe (or simply the Holocaust Memorial) in a location very close to the Brandenburg Gate in central Berlin that appears to has gained most attention in German media.

The Holocaust Memorial is after all merely a symbolic object, a sculptural construct, and still it has generated a vast amount of news articles over the last few weeks. This is of course an extraordinary memorial. Sixty years after World War II the German government has finally, after much debate, been able to build a memorial to the Jews who were killed in the extermination camps of the Nazis. The value of this symbolic gesture cannot be underestimated. It is after all not often in history that a government has decided to build a memorial to a people that a previous regime tried to exterminate (imagine for example the Turkish Government building a memorial to the victims of the Armenian Holocaust in the middle of Istanbul).

The debate generated by the Holocaust Memorial can be traced back to the case with the Neue Wache [1]. The German chancellor Helmuth Kohl outraged both the Jewish community and Conservatives in his own party, CDU, when he declared the Neue Wache as the "National Memorial for the Victims of War and Tyranny" in 1993. Conservative forces found the sculpture, which is the memorial's centrepiece that was originally created by the devoted socialist Käthe Kollowitz, to be a flirt with Social Democrats and Socialists. People in the Jewish communities on the other hand were offended by the choice of motif - the Pieta -, which depicts Maria Magdalena holding the dead Jesus in her arms. They argued that the sculpture would only play into the hands of anti-semites who often accuse the Jews to be responsible for the death of Jesus. All fractions accused chancellor Kohl for not consulting them beforehand. Helmuth Kohl made another drastic move only one year later when he dismissed the proposal for a national memorial to the victims of the Holocaust that was elected in an open competition among artists and architects in Berlin. Instead he took over the initiative and announced a new competition, which was won by American architect Peter Eisenman and resulted in the Memorial to the Murdered Jews of Europe. It is perhaps not too far-fetched to assume that Helmut Kohl saw an opportunity to correct the mistakes with the Neue Wache, but also the Holocaust Memorial project has been marked by controversies from the start.

Now when the Holocaust Memorial is in place it has been criticised for not including other groups that died in the extermination camps. What about the Romas and Sintis? What about the homosexuals and the political dissidents? German nationalists to the extreme right are also complaining loudly that the state is desecrating the remnants of German soldiers and run their own campaign of victimization [2]. The most serious blow to the memorial's legitimacy could however be coming from the Jewish community. After the debacle with Lea Rosh and the now famous tooth that she found in the concentration camp Belzec (which she intends to embed in one of the steles of the Holocaust Memorial [3]), some Jewish leaders have warned that they would consider to recommend Jews not to visit the memorial. This criticism was highlighted when the Israeli Secretary of State, Silvan Shalom, visited Berlin on May 19. Mr Shalom chosed to hold a memorial ceremony in remembrance to the Jewish victims of the Holocaust at the Grünewald train station, from where many of Berlin's Jews were deported, rather than at the Holocaust Memorial.

The local newspaper Der Tagesspiegel reported: "'The past and the emotions are easier to comprehend at the original sites' said Amit Gilad, spokes-person at the Israeli Embassy in Berlin. Apart from this there is no place allocated at the new stele-field in Mitte where wreaths can be laid and ceremonies held. The secretary of state, Shalom, will however inspect the memorial, but only as a work of art. 'The memorial will find its place in the city', said the spokes-person from the embassy, 'I hope not only as a place to air dogs'" [4].

If the Jewish community does not accept the Holocaust Memorial as an important memorial site it will indeed be degraded merely to an exhibit and an enormous sculpture without real symbolic value, and the memorial would rather become a monument for the German people, as a remainder of their part in the Holocaust. And there is even criticism regarding this function of the memorial. How can visitors be able to identify? Some critics say that the memorial is far too concentrated on the victims and that the perpetrators are more or less invisible.

The way the memorial is used by a few but loud youngsters only increases the feeling among many that the memorial is becoming an embarrassment for the city of Berlin. When school kids invades the memorial in the daytime it tends to turn into a playground rather than a memorial site where the most hot-headed are challenging the increasingly frustrated guards by leaping from stele to stele. Both the former mayor of Berlin Eberhard Diepgen (CDU, the Christian Democrats) and the present Mayor, Klaus Wovereit (SPD, the Social Democrats) have suggested that visitors should have to pass the underground information centre before entering the stele-field in order to give it a clearer status as a memorial site. [5]

A more seemingly absurd question posed in German media concerning the memorial is how it "feels" to visit it. It is as if the journalists themselves grasp for an engaging emotion. Apart from being quite sombre - the grey steles seem to absorb the light - the design is indeed stripped of emotional symbols, even though connotations to grave fields or Jewish cemeteries can easily be made. In the end the design can't in itself wake up emotions among people who have not been affected by the Holocaust one way or another. The strongest emotions are to be found in the hearts of the people that experienced the atrocities, as perpetrators, victims or liberators. The object is in itself numb; the traumas are not. If people are finding the memorial to be "cold", is that not a reflection of their own indifference? I don't know whether Peter Eisenman had all this in mind when he created the design, but in a sense I want to believe that he intended to force visitors to contemplate their personal relation to the Holocaust.

In the end the question is if the Holocaust Memorial can help to heal the wounds from the Second World War, if it can comfort the Jewish community, if it can help to create a consciousness among the public about the Holocaust. If the answer is no, it would be very easy to criticise the German government for again failing to create an appropriate memorial. The issue is however much more complex than so. Wouldn't it be we, the people, which have failed to learn something from history?

There are people in Germany who are criticising what they call a "remembrance culture" ("Gedenkkultur"), which produces an endless amount of new exhibitions, films and memorials about the Nazi era and the Holocaust, but which fails to put the history in a contemporary context by avoiding completely to address racism and human rights violations in the present. One of those critics is the Professor in Sociology Y. Michael Bodemann who has written several books about the holocaust. The Berlin-based newspaper Die Tageszeitung (TAZ) published an interview with him on Friday May 13, which addresses these issues in a very straightforward way. Professor Bodemann says in the interview that he has an "impression that the Nazi era often is conjured as a distant, mystified, obscure past which serves as an escape route from the present." Professor Bodemann means that many Germans fail to address the issue of racism in contemporary society while being stuck in an unproductive, self-referencing remembrance culture. The holocaust appears to be so special that it is considered obscene to connect it with present events. Bodemann says: "I wish that an attitude would be the consequence of this preoccupation with the Nazi era - for example that people would start to work for the respect of human rights".
Professor Bodemann mentions three causes for this growing remembrance culture of which I find the third to be particularly interesting. "The third cause is what seems to be the disappearance of ideas for the future, for utopias, as we used to call them. When you don't expect the future to bring anything good with it, it is easy to get obsessed with the past. The icon for this state of mind is Walter Benjamin's 'Angel of History', which walks backwards into the future turned to the past. The inflated use of this image in Germany is not a coincidence: it reflects resignation and melancholy. Would it not be better to look more into the future, to create new worlds and societies and at least create a bit more of social justice and human dignity?" [6]

Professor Bodemann describes a nation that is unable to come to terms with its future, rather than with its past, to which it clings like it was the only support available. I must say that I however found the "Day for Democracy" at June 17th Street on May 7 and 8 to be an attempt to make just that connection between past and present that Bodemann is asking for. My impression from this event was a Germany that wants to address complicated issues in the present with the help of the past. This was the main venue for the 60th anniversary of the war and still, to my surprise, the war felt very distant. Numerous NGO:s and political parties had gathered at the Brandenburger Gate to express their support for democracy and to condemn racism. This attitude was perhaps best expressed in the way the German parliament, the Bundestag, and other governmental institutions advertise and promote democracy and political participation in order to engage the citizens in the political process. They have bitterly learnt from history that democracy is something that does not come natural but that it has to be fought for.