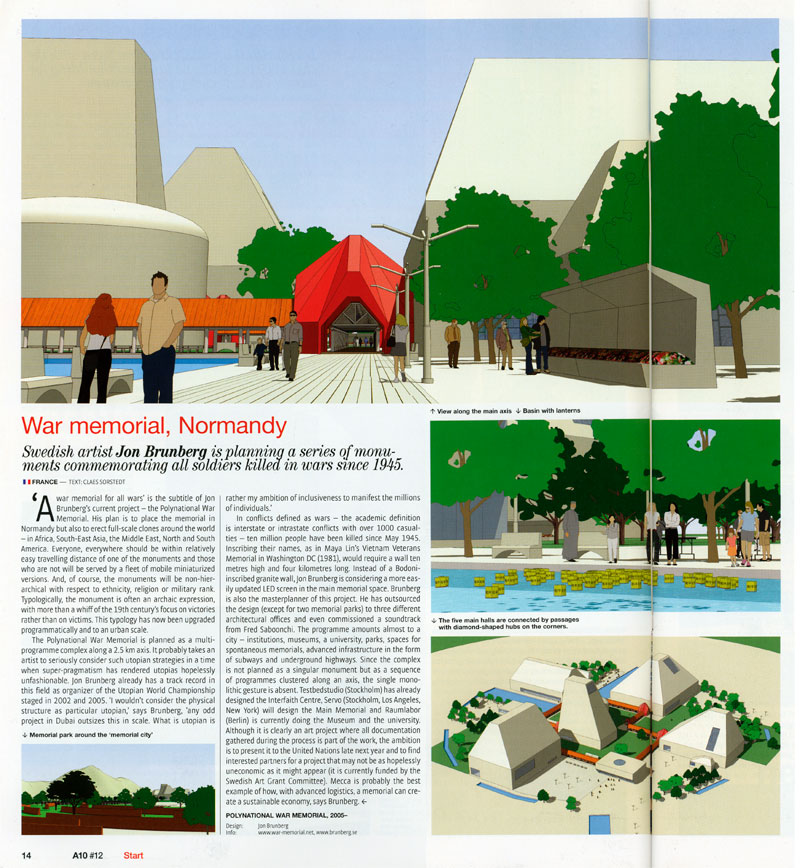 /Ingress/
The Swedish artist Jon Brunberg is planning a series of monuments commemorating all humans killed in wars since May 1945.

Stockholm (SE) 'A war memorial for all wars' is the subtitle for the artist Jon Brunberg's current project - the Polynational War Memorial. His plan is to place a memorial in Normandy but also to erect full-scale clones around the world - in Africa, South-East Asia, Middle East, North- and South America. Everyone everywhere should be able reach one of the monuments without too much travel and for those unable to do so, a fleet of mobile miniaturized versions will serve them. And of course, the place will be non-hierarchical of ethnicity, religion and military rank. As a typology, the monument usually is an archaic expression, with a scent of the 19th century's focus on victories rather then on victims. It has now been upgraded programmatical and to an urban scale. The War Memorial is planned as a multi-program complex and stretched out on a 2,5 km axis. It probably takes an artist to seriously consider such utopian strategies in a time when superpragmatism has rendered utopias hopelessly unfashionable. Jon Brunberg already has a track record as an utopist and organizer of the Utopian World Championship; staged 2002 and 2005. - I wouldn't consider the physical structure as particular utopian, says Brunberg, any odd project in Dubai outsizes this in scale. What is utopian is rather my ambition of inclusiveness to manifest the millions of individuals.

In conflicts defined as wars - the academic criteria states interstate or intrastate conflicts with casualties over 1000 persons - ten million persons has been killed since May 1945. As a scale reference, just the inscriptions of the individual names, as in Maya Lin's Vietnam Veterans Memorial in Washington DC (1981), of the ten million would generate a ten meter high wall, four kilometres long. Now, Jon Brunberg is not planning a bodoni inscribed granite wall, but considers a more easily updated LED-screen in the main memorial space. Brunberg is as much an artist as a masterplanner in the project, he has outsourced the design (except for two memorial parks) to three different architectural offices and even commissioned a soundtrack from the musician Fred Saboonchi. The program add almost up to a city - institutions, museums, a university, parks, spaces for spontaneous monuments, advanced infrastructure in form of subways and underground highways. Since the complex is not planned as singular monument but as sequence of programs clustered along an axis, the singular monolithic gesture is absent. Testbedstudio(Stockholm) has already designed the Interfaith Centre, Servo(Stockholm, Los Angeles, New York) designs the The Main Memorial and Raumlabor(Berlin) is currently doing the Museum and the university. Although it is clearly an art project where all documentation along the process is part of the work, the ambition is to present the project to the United Nations later next year. And to find interested partners for a perhaps not as hopelessly uneconomic project as one would think(the currently funding is coming from The Swedish Art Grant Committee.) - Mecca is probably the best example of a memorial can create a sustainable economy and growth dependent on advanced logistics, says Brunberg.