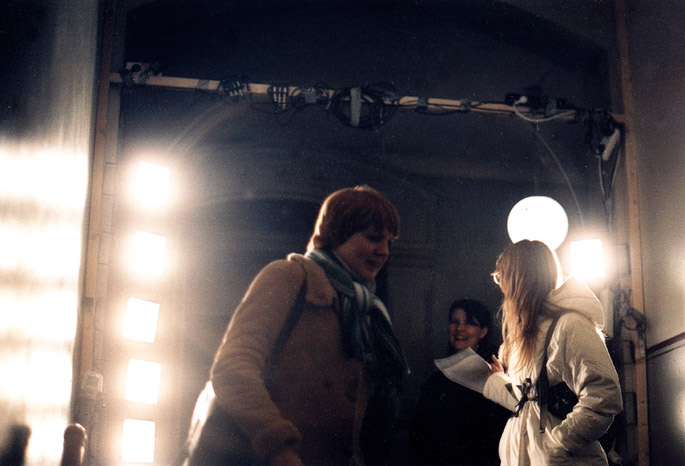 To enter the Enkehuset Gallery in Stockholm you need to ascend a staircase to a landing, turn right and walk up a short stairway to the first floor. You´ll pass a hall to enter the former chapel, nowadays turned into a gallery space. During the conference/exhibition The Art of Organising that took place in Stockholm in november 2001 I installed a surveillance system with movement sensors, video cameras and ten 500 w halogene floodlights.

As soon as a person entered the last stairway up to the gallery he or she triggered off a movement sensor and was flooded by light from six of the lamps, creating an intense witheout. At the same moment the image of the passing and blinded person were captured by a surveillance camera and during the time the floodlights were lit, approx. 6 seconds, the image was shown by a video projector in the main exhibition hall.

When this person continued to walk another set of floodlights were triggered off by a second movement sensor after just a few meters. A second camera would show the image of the passing person from a different angle. On the projection in the main hall it would look as if this person were followed by the cameras trough the passage. When no one triggered the surveillance system the cameras and floodlights were turned off and the projector showed only a blue screen.