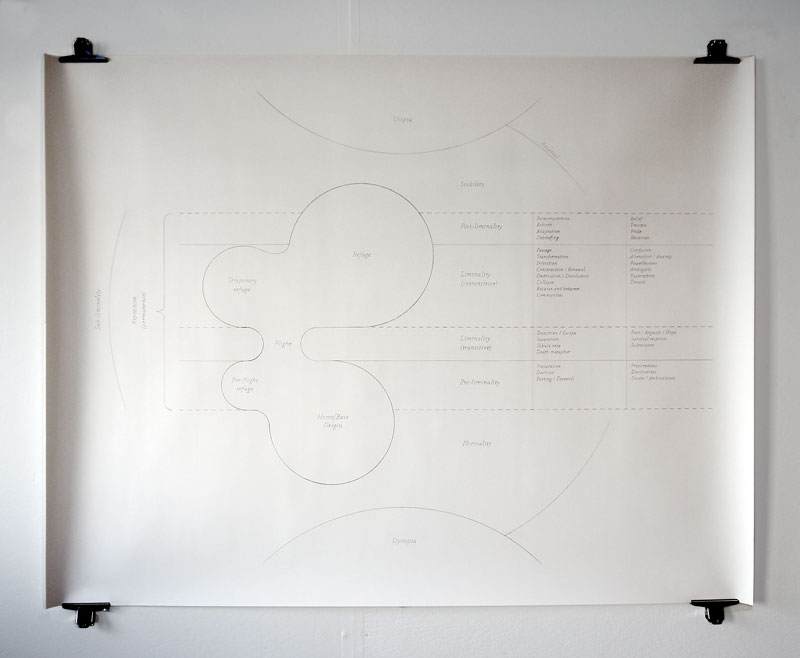 These two interconnected works are focusing on a series of terms that are related to human transformation in general, and fleeing and refugeeship in particular, which are examined, visualized and interpreted in a large schematic diagram and an audio piece.

The main term in these works is “liminality”; a concept which was developed by the anthropologist Arnold van Gennep in the early 20th century, who used it to describe the ambiguity and disorientation that occur in specific phases during initiation rites when the participant stands on the threshold between their old way of structuring their life and a new identity created by the rite, while not yet being fully initiated. Later, not the least because of the work of the anthropologist Victor Turner, the use of the term has widened and become popular for describing human transformations.

Diagram and Stay/Stranded builds on and the original concept of liminality but adapts it to the act of fleeing from an undesired to a desired place or state of being. Where Diagram visualizes the concept of liminality as a spatial/temporal map, Stay/Stranded builds a narrative around the concept by explaining some of the stages in the passing through the liminal landscape and by introducing subjects, who we could call refugees, who follow its perilous path. The title of the audio piece refers to a tension between the desire to settle and the fear of being stranded.

These works were created for the exhibition Wir Sind Paul – Bleiben at Neues Kunsthaus in Ahrenshoop. They were inspired by several events and texts: most notably an academic paper by F. Tilbury, Y. Touissant och A. Davis in Transformations Journal about a cooperation between artists, advocates and refugees in western Australia, Fabrizio Gatti's book Bilal, and the history of the flight of my father from Estonia during World War II.