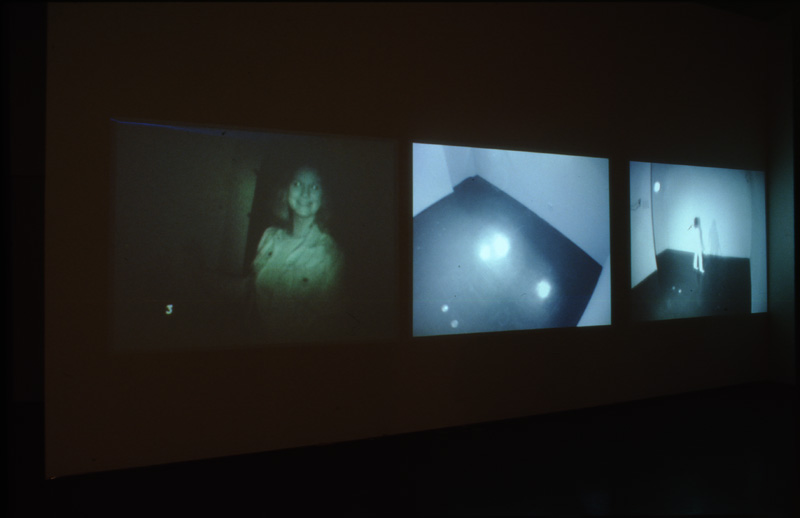 Disjunction (and nowhere to turn to)

Five video films form the base structure of "Disjunction (and nowhere to turn to)". They are documentations of a person or group accomplishing a task that would be an everyday act under normal circumstances, but which demands a totally different approach when performed in complete darkness. A woman is doing her makeup, two persons are moving from point A to point B in a for them unknown culvert, a rock group is rehearsing in a small, solitary cabin in the woods and a string quartet is playing. These activities were all performed in complete darkness (or rather: in the most amount of darkness available) and were captured on video with an infrared sensitive camera, able to record in 0 lux.

Three video projectors display these videos onto a wall which divides the room diagonally into two parts: a light part where the projectors are located and a pitch-black part which is empty apart from two infrared sensitive surveillance cameras, two movement detectors and one lamp emitting infrared light, invisible for the human eye. When a person enters the dark room, he will activate one of the movement detectors, which in turn will cause one of the video relays to change source, from pre-recorded material composed of the five video films mentioned above, to the image from one of the cameras. For ten seconds, the person's actions will be shown 'live' by one of the video projectors in the light room on the other side of the wall. No delay is applied to this system, which meas that visitors will never see themselves move trough the black space.

Excerpt from The Southbound Catalogue
By Erik van der Heeg, 2003

"Jon Brunberg has been at the forefront for several years when it comes to merging a pregnant aesthetic form with the latest in technology. /.../ In all of his works, the viewer will find a web of meticulously interwoven themes on how politics, aesthetics, philosophy and psychoanalysis react vis-à-vis each other inside the ‘techno-sphere’ that constitutes today’s Western society. For this show, Brunberg has created a set of monitors showing various everyday activities carried out in total darkness. The viewer is able to follow the plots through the same infrared lenses that recently have become familiar by giving soldiers night-fight capability on the battlefield. A whole complex of art historical and psychological themes relating to vision, blindness, control and observation are brought into play here – themes stretching back to Velasquez's Las Meninas and Freud’s castration complex. The surveillance cameras used for this piece have an almost emblematic status in our modern security obsessed world. But the attentive viewer will nevertheless observe a paradoxical phenomenon beyond all voyeuristic aspects: the almost touching serenity of our mundane daily life. A girl doing her make-up, a couple making their way through a dark culvert, a band rehearsing in a cabin in the woods – all become symbols of what is human in us all."