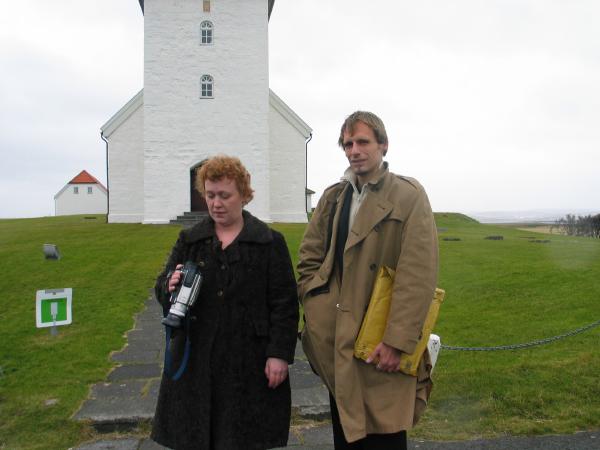 Delivery of the UWC DOC 01 to Iceland's President

One cornerstone of the Utopian World Championship is that the final document, which includes the winning essay, should be delivered to Heads of State all over the world. The document have been sent to numerous prominent persons by mail but on one occassion I had the honour of delivering it in person to its recipient, the President of Iceland: Mr Olafur Ragnar Grimsson. The delivery took place on October 6, 2003, on the last day of my visit to Reykjavik for my solo show at the Hlemmur Gallery, only a few hours before my flight back to Dublin where I was living at the time, and it was an event to remember.

The Icelandic President's residence is beautifully located at the sea in the city Hafnarfjördur. An assistant from the gallery drove me there. We were late for the meeting and I guess just a bit too eager to get to the residence in time. With only a few hundred meters to the residency and with its white buildings in sight the police stopped us for speeding. We were quite stressed out and the assistant pleaded to the policeman to let us off his hook with a sentence that indeed sounded like something from a film: "But, we're having an appointment with the president!" I guess anyone would have said the same thing in the same situation. It didn't however stop the policeman from giving her a ticket.

Late enough we entered the residence and after five minutes we were taken to Mr Grimsson who kindly accepted the document and posed for photos. We didn't change many words. This was a photo-op more than anything else and I remember being too nervous about the whole thing to make a good conversation party. The whole thing was anyway over in about five or ten minutes. Mr Grimsson's appearance was that of a gentleman, and my impression was that he was truly curious about the project. I hope that he got a few good hours of reading the essay by TROY that won that year's championship and that it gave him a few new ideas how to run his country.