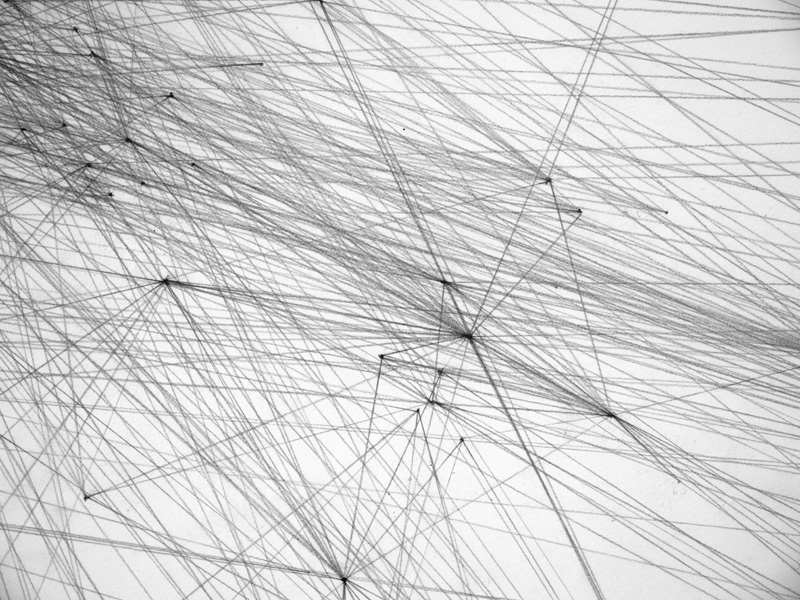 The first, smaller version, of this drawing was created during a residency at Künstlerhaus Lukas in Ahrenshoop, in January 2014, and was shown in my studio there during the opening weekend of the year-long festival Zufluch – von Sehnsucht des Paradies. The larger version was produced for the group exhibition Denkräume 2014 – Konstruktion ins Offene at Meklenburgisches Künstlerhaus Schloss Plüschow in Plüschow.

The fine graphite lines of this drawing represents the movement of asylum seekers in 2012 on a world map where all borders have been omitted. Lines are drawn between countries of origin and destinations, but only if more than one hundred people in a specific country applied for asylum in another country. The work is based on data published by UNHCR in an annex to their Global Trends report for 2012.

From a eurocentric point of view it would perhaps be easy to jump to conclusions and interpret the image as showing a flow of asylum seekers from all over the world to Europe and North America. In reality, however, the underlying data, and thus the drawing, shows a much more complex picture.

Firstly, there are no indicators, such as arrows, that distinguish origin from destination and viewers who dig into the data may be surprised to learn that some countries that used to be viewed as underdeveloped and marred by violence, such as South Africa, are actually today magnets for asylum seekers. Furthermore, several countries, such as Tchad, are actually both origin and destination.

Another intreresting finding is that asylum seekers do not always move from the ”underdeveloped south” to the ”developed north”. One example that may surprise some, and one which is represented by a line on the map, is that more than one hundred Americans applied for asylum in Canada in 2012. Even from my own country of residence, Sweden, around twenty people applied for asylum elsewhere in that year.

This map may be of little use for those who seek detailed statistics on migration, or want to score political points – not the least because of the exclusion of national borders, but also because it does not say anything about the amount of asylum seekers each country receives, nor how many gets their asylum applications rejected or approved. It is rather an attempt to show an abstract overview of the movements of people in the world on a global scale that may hopefully inspire viewers to learn more about issues related to migration and refugees, issues which are indeed, at least in Europe, one of the most debated in our time.