19 years + one tool for measuring power 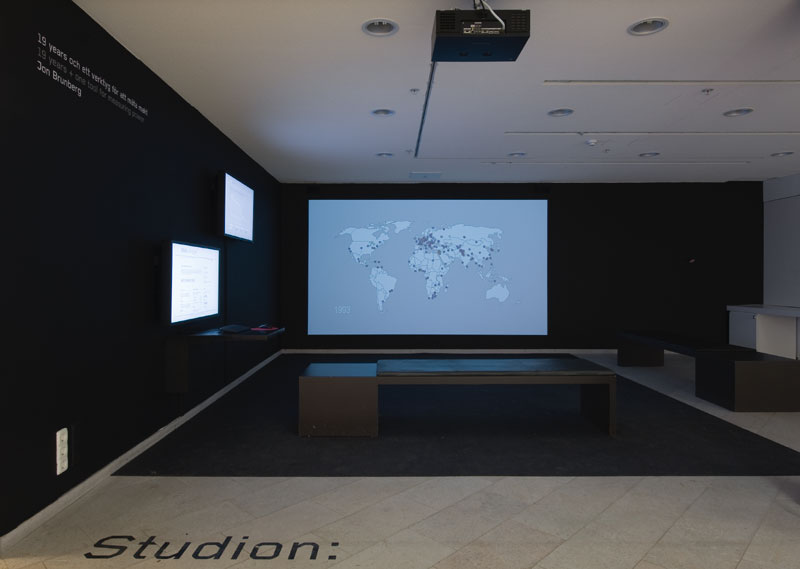 25.2 Thursday at 6-8 pm Opening and conversation
At 6.15 pm Jon Brunberg presents 19 years + one tool for measuring power in a conversation with Catrin Lundqvist, curator, Moderna Museet and the public.

Jon Brunberg's art revolves around individual, collective and political power. He uses digital media to produce video sequences and internet-based systems and images. 19 years shows collective manifestations from 1989 to 2007, as dots on a world map, in 30 seconds.

The starting point of the art work coincides with the year when the Berlin Wall fell. Early that year, the Moslem world was shaken by Salman Rushdie's The Satanic Verses, which caused widespread protests in many countries, including India and Pakistan, and in the early summer the Tiananmen Square in Beijing was the centre of the world's attention. At a fast pace, 19 years presents one-day events in which thousands of people have participated in protest actions that were intended to be peaceful, although some of them escalated into riots or even led to coups d'état.

The Gothenburg Riots of 2001 are, of course, featured, along with the enormous demonstrations that took place on February 15, 2003, when the West was preparing to invade Iraq. The whole world protested on an unprecedented scale against the war plans, but to no avail. It may seem as though some of the events have gone unnoticed, although they were significant on a local level, for example when China put the lid on after the massacre at Tiananmen Square. Although peaceful manifestations resumed after some time, few details reached the world and were rarely reported in the press, which has been Jon Brunberg's main source. If you wish to learn more about his research methods and definitions, visit www.jonbrunberg.com/19y/

The Power Tool is an internet-based art work that offers you the possibility to measure your individual power. The piece is process-based and in continuous progress. Jon Brunberg has sharpened the tool for this exhibition, for its visitors, and their decisions regarding their own power. What is power? How powerful are you? With the power tool you can measure and analyse your power and compare your ranking with other users. Issues of individual power are a relatively new phenomenon, connected to ideas about individuality versus collectivity that are representative of our time. Who decides who has power? Can power be quantified? Metaphysical issues emerge as you start to answer the tool's questionnaire.