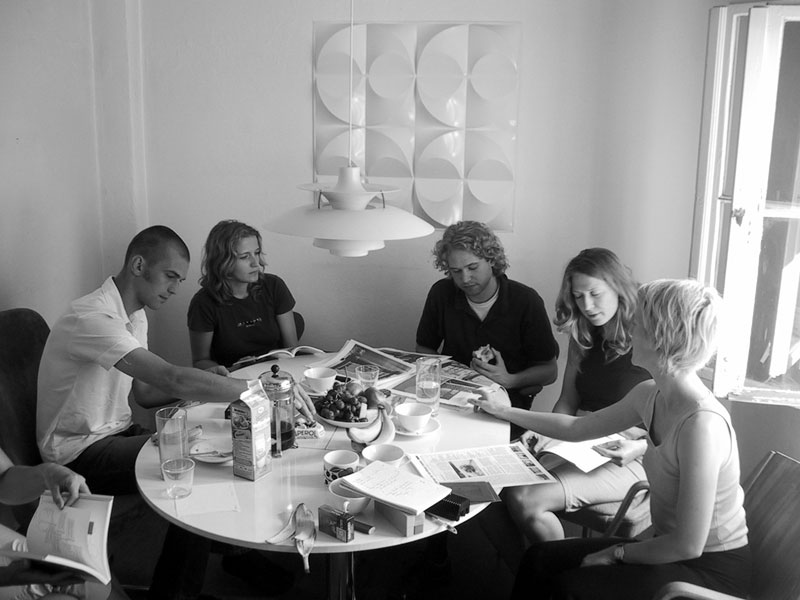 The Southbound project began during the summer of 2001. At that time, a wave of Nordic artists had arrived in Berlin planning to stay here for a while and work. This was not a flood but rather a significant number of people who formed an unfixed network by moving around the Berlin art scene and encountering each other. This community, however real or 'imaginary' its existence might be, came to form the basic thematic structure of the Southbound project and thus put the notion of nationality in the crossfire. Rather than trying to define 'the Nordic' or promoting a specific Nordic line of art, we want to visualise the network, to emphasise the diversity of individual artistic expression within it, and to put a spotlight on the Oedipal relation between nation and individual. Southbound can thus be seen as a case study that applies to any network in the diaspora, defined in national terms or otherwise.

Instead of creating a series of events based on a theoretical framework, we decided on a more organic working process: a method that was in jest defined as 'auto-curating' instead of the hierarchic decision-making structure which is usually applied in institutionally curated shows. From the outset, there was no fixed set of artists, no line-up of works, but rather a slowly growing group of participants who emerged from networks between individuals and groupings of Nordic 'extraction. ' The fl exibility inherent to this kind of project management enabled a vital fl ux of ideas and exchanges within the group. Southbound is to be seen as a contribution to an on-going debate. The practices of individual artists, art historians, panellists and writers have been brought together;the result will be whatever is created by this mix. In other words, we are not meeting to set down a manifesto;we have met for the purpose of generating a discussion which will, we hope, open up new and unexpected doorways.

See also: Disjunction (and nowhere to turn to)