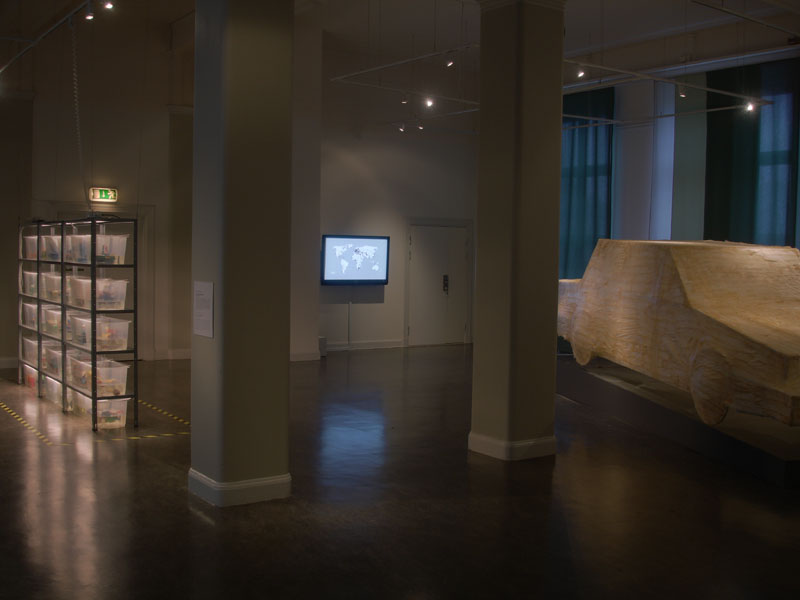 Changing Matters – the Resilience Art Exhibition is an art exhibition about the interplay between man and nature, about life in change. It is shown in addition to the international conference Resilience, Adaption and Transformation in Turbulent Times which for four days gathers some of the most prominent scientists, business leaders and politicians in the world in Aula Magna at Stockholm University, the 14th to 17th of April 2008. This summit will discuss ecology, economy and society using a resilience perspective, where man and nature will be studied as an integrated whole.

A jury with respected representatives from the art scene and scientists has chosen 12 artists artists/artists groups among the in total 220 proposals that were sent in on the resilience theme.

Among the chosen artists are Gunilla Bandolin and Sverker Sörlin (Sweden), who together have created a sculpture in the shape of a full size car using animal intestine as material; influenced by working methods of the Inuits and their way of using the resources of the nature; Tuula Närhinen (Finland) who will create an installation using floating pieces of plastic she has found near the sea; the Centre of Attention (France/United Kingdom) who put the attention on all ideas about the conventional art object and Christine Ödlund (Sweden) who, in collaboration with KTH, “translates” the chemical substances different plants sends out, when being attacked or stressed, to sound.

Resilience is an interdisciplinary perspective on environment and development that distinguishes from other environmental research since man and nature is studied as an integrated whole. The concept has its origin in the research made in ecology science made in USA and Canada in the 1980’s and defines a system’s ability to withstand both sudden gradual change and still advance further. Concurrently with the progresses of the environmental research the resilience concept today includes economical as well as social and cultural dimensions, systems that in different ways branch off and is attached to the ecological reality that surrounds us.