A Memorial and a City. Two case studies. 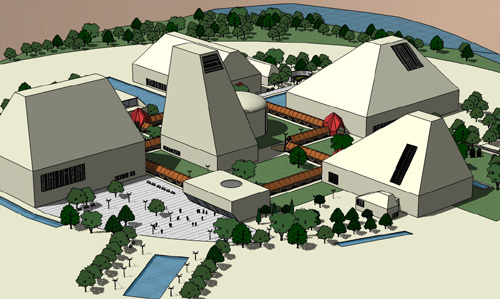 The Polynational War Memorial, part 3: the Interfaith Centre is the first in a series of 3D- animated films that present the various parts and institutions proposed for the Polynational War Memorial, which is a long term and multidisciplinary project that Jon Brunberg has been working on over the last four years, with the goal to create a proposal for a global war memorial complex in remembrance to all civilians and soldiers killed in war since 1945. This complex includes a series of institutions that deals with conflict, trauma, remembrance and reconciliation, and Brunberg has commissioned designs for these from three architect groups/-offices: Testbedstudio, Servo and Raumlabor.

The current video describes the Interfaith Centre, which was designed by Anders Johansson and Erik Winquist at Testbedstudio. The video includes a soundtrack by composer Fred Saboonchi and voice by Lisette Merenciana. The Polynational War Memorial project is funded with a project grant from The Swedish Arts Grants Committee.

A memorial and a city is shown in the lobby at Clarion Hotel during the periods Jan 15-20, Jan 23 - Feb 5 and Feb 10-15 (schedule may be subject to change). The exhibition also includes the work "WARTOPIA I, Berlin 518, Moscow 1122" by polish artist Aleksandra Polisiewicz. Curator: CRAC/Tobias Sjödin.