101 Years and One Vision for the Future of Mankind 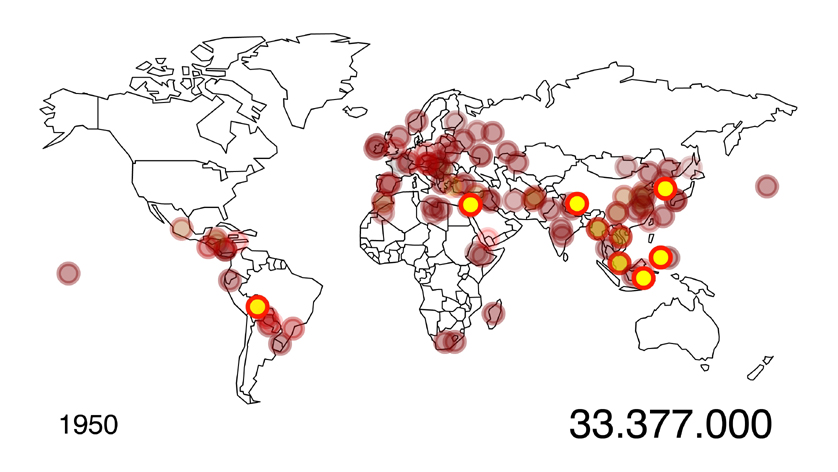 In the last decades the world have seen a couple of events that have redefined the international political landscape drastically, and my solo exhibition "101 Years and one Vision for the Future of Mankind" at the Hlemmur Gallery takes two of those defining moments as a starting.

The main work with the title 101 years is a projected animation that uses conflict research to visualise the war-ridden 20th century. The animation display all wars that has been going on in the world between 1900 and 2000 over twenty seconds, meaning that every year is merely the fifth of a second. Like an epidemic or an accelerating skin disease, war is spreading over a black and white political map. Whenever a war starts a red and yellow circle is lightening up on the current location on the map, accompanied by a distinct bomb sound effect, and fades into a purple semitransparent dot when it is over. The resulting appearance resembles an increasingly dense bomb carpet as seen from above. Two counters keep track of the years and casualties. The latter figure is based on research made by several conflict research institutes with the Nobel Peace Prize Committee as the primary source.

The other work shown in the smaller room of the gallery uses the same map as in the above-described work, but for a quite different purpose. It is displaying the current status of the ongoing worldwide competition "The Utopian World Championship", which I initiated together with Annika Drougge within the framework of the Stockholm based artist group SOC. The championship is an attempt to determine the status of current utopian ideas after the fall of the Soviet bloc, which ended an era of utopian experimentation with partly catastrophic consequences. The map, which is drawn directly on the wall, shows the events of the championship so far, with images of the jury and finalists from the first championship as well as the location of residence of the competitors of the ongoing. It also maps the locations of the Utopian World Championship tour.

One of my assignments within the framework of the Utopian W.C. World Tour was to hand over the final document in person to the Icelandic President, Olafur Ragnar Grimsson, who I met on October 7, 2003 in his residency in Hafnarfjördur. Read more about this event.