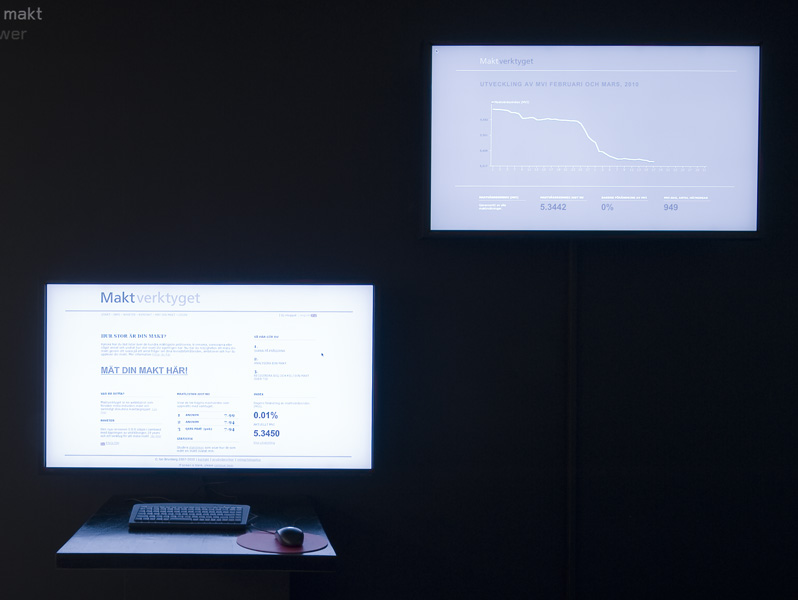 The Power Tool is a web application that attempts to measure and analyse the power of individuals based on a simple online poll. The result is measured on a scale from 1 to 10 where 10 indicates absolute power and 0 absolute powerlessness.

The poll has a narrative: for each step you take the questions become increasingly existential in charachter. It starts with questions about country of residence, gender, income, education and such - what I call the "hard questions" - and ends with questions where your'e asked to estimate your social and cultural capital and finally your own power and your will to power (soft questions).

To estimate the value of the answers to the hard questions I've used country-based data from United Nations Development Programme. The points for the soft questions have been evaluated by myself.

The average of all measurements is called the global Power Value Index (PVI). All users can influence this index and their own points by rating the weights of the questions and answers. They thereby contribute to a Power Value Index which becomes more "democratic" with the number of users modifying it. A registered user can also follow their power over time and thereby use the service as a power management tool.

This work builds on the idea that power can be measured, an idea which have been refuted in theory many times, while still being executed in practice by political and academical institutions - not to mention the many and often quite shallow examples that can be found in popular and political culture.

The first version of the application was first presented at the group show Duplicate at Magasinet in Falun in 2007. The application was also shown in my solo show at Moderna Museet in Stockholm in 2010. The website have been online since 2007 and is updated whenever it is exhibited.

Take the test at powerinstruments.net/en/