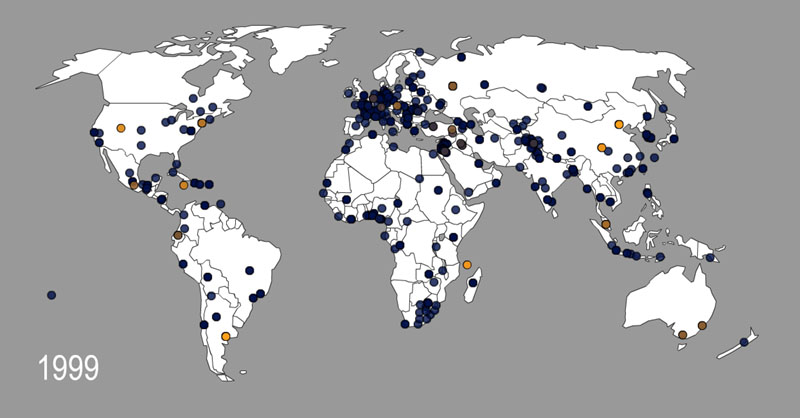 Hundreds of dots bubble up on a black and white political world map, spreading out as a rapidly proliferating contagion affecting most parts of the globe. They're lit as orange circles on the approximate location where an event happened, while generating a sound that creates a static noise that varies in intensity depending on the number of dots displayed simultaneously.
Each of these dots represents a protest action – a demonstration, march, rally or one-day general strike – for which thousands1 of people amassed in one physical location during one day to express their discontent. These actions were not, at least officially, arranged by a government nor organised as a part of an election campaign. They were intended to be peaceful, although some of them escalated into riots or even led to coup d’etats.

The animation 19 Years presents over 1.800 such events in chronological order, in almost 600 locations during a period of 19 years. It's around 35 seconds long – meaning that one year in real life equals roughly two seconds in the animation.
The animation starts at 1989, a year of many popular upheavals and protests of which some would shake, and change, the world profoundly. Early that year, widespread protests against Salman Rushdie’s The Satanic Verses ripped through the Islamic world, in the early summer the Tiananmen Square protests in Beijing was at the centre of the world’s attention and during the last days of 1989 the Berlin Wall suddenly and unexpectedly crumbled.

This work could be seen as an attempt to describe a specific type of human activity as nature – by mapping the way it spreads across regions, while applying a perspective that do not differ between motives – be it shortages, injustice, ideology or religion.
Instead of focusing on details, particularities and conflict dyads the work approaches history in a holistic or structural way, by using a world-view perspective in combination with a compressed real-time to animation-time ratio, which makes it difficult to perceive and focus on single events.

The master version of the work is a Flash software application written in ActionScript2, which creates the animation programmatically from a dataset. This allows for the work to be updated with new events in the future. In exhibitions, the animation is shown either in its original Flash format or as video3. I've collected the data from public websites, predominantly from media outlets (where the New York Times' news archive is the single most referenced source) using my own methods, definitions and criteria. The data is available at the project's website along with information about the data collection process4.

The work was originally produced for the jury-selected exhibition Changing Matters – the Resilience Art Exhibition which was shown at the Museum of Nature History in Stockholm in 2008 as a part of the international conference Resilience, Adaption and Transformation in Turbulent Times at Stockholm University – a summit which discussed ecology, economy and society using a resilience perspective, where man and nature was studied as an integrated whole. The work has thereafter been shown in a solo exhibition at Moderna Museet in Stockholm (2010), and in group exhibitions at Ballroom Marfa in Marfa (2012), State Darwin Museum in Moscow (2013) and Schloss Plüschow in Plüschow (2014).