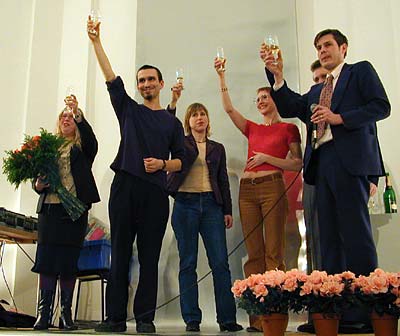 On January 19, 2002, the first Utopian World Championship Gala was held at Gallery Enkehuset in Stockholm. At this event an american who posted his entry under the pesudonym T.R.O.Y. was announced as the first champion and handed a check for 1000 USD. The video presented here is a short documentation from the gala night.

The Utopian World Championship is a multidisciplinary and process based art work in the form of an open, competition in utopian thinking. This competition, which has been run twice since 2001, has attracted scholars, authors, artists and political activists from a broad range of disciplines, and from all corners of the world, whose common ground is to try to formulate answers to the question how we can define and create the perfect society. The participants have contributed to the competition with essay about their visions and those have in turn been judged by a jury composed of laymen and experts in political scence and utopism.

Appearing in the video are:

Read more about this project and download the winners' essays

The first Utopian World Championship Gala was held at Gallery Enkehuset in Stockholm on January 19, 2002.