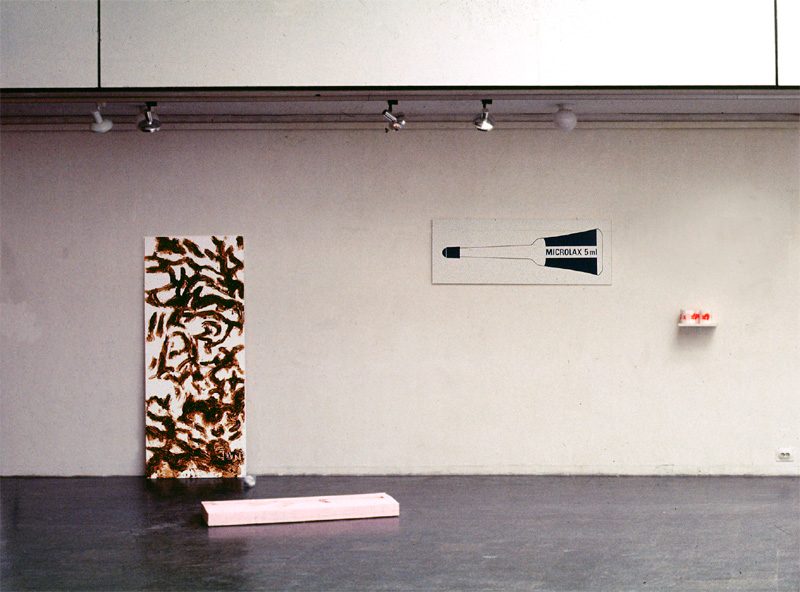 When the last gram of fat is consumed....

When the last gram of fat is consumed.... was made for the student exhibition Iconoclasm at Konstfack in Stockholm. The work, which was composed of four loosely linked parts: two paintings and two objects, was an attempt to create a symbolic narrative about the relation between resistance and excrement, and how it can unite the personal and the political.

The work was inspired by Sigmund Freuds' theory of the anal-sadistic protest of the child, which is outlined in the book Sexual theory, and draws a line from my own experiences of the bowels as a battleground and tool for protest at an early age, to a particular political protest that took place in the infamous high-security prison Long Kesh (also known as the Maze) in Lisburn, Northern Ireland, in 1976-1980 where a large number of prisoners from the Irish Republican Army (IRA) were incarcerated as a result of UK:s imprisonment tactics.

The imprisonment tactics led to a concentration of the struggle inside the prison walls creating a highly charged atmosphere centered around the prisoner's body and hygiene. In the escalating hostilities between prisoners and guards, sometimes known as The Battle of the Bowels, the prisoners were refused to empty their chamber pots and to get rid of their faeces they smeared it all over their cell walls. These ”wall paintings” often resembled ornaments or abstract expressionist painting.

The centerpiece in ”When the last gram of fat is consumed … ” is a painting made with my own human excrements, which depicts such a wall decoration by an IRA inmate. The motif is a reproduction of a part of a painting by British artist Richard Hamilton, who in turn has reproduced a photo from a news outlet (BBC?). This centerpiece is surrounded by a painting that reproduces a part of the carton design for a brand of medical laxative (Microlax), a set of toilet paper rolls with red fist imprints and a sculpture in cell plastic which functions as a AK47-shaped pool filled with a detergent.

The title is the first sentence in a paragraph from an anatomy book, which describes how studies of the deadly hunger strikes of the IRA inmates that followed the Battle of the Bowels revealed that the exact moment of the death of a hunger striker occurs when the body consumes its last gram of fat.

The work has only been shown once. All parts except from the set of toilet paper rolls have been destroyed.